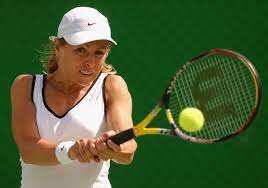 Amanda Coetzer ,born 22 October 1971 in Hoopstad is a South African former professional tennis player. Coetzer finished in the WTA rankings top 20 for ten consecutive seasons (1992–2001), peaking at world No. 3. She reached three Grand Slam semifinals (Australian Open 1996 and 1997, French Open 1997) and one Grand Slam doubles final (US Open 1993). Coetzer earned a reputation for regularly beating players who were ranked higher than she. By virtue of scoring so many upset wins in spite of her five-foot-two (1.58m) stature, she gained the nickname: “The Little Assassin”.