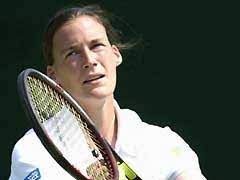 Barbara Schwartz, born 27 January 1979 is an Austrian former professional tennis player. Schwartz turned professional in 1995 at the age of 16, and reached a career-high WTA world ranking of World No. 40 on November 8, 1999, after reaching the quarter-finals of the French Open at Roland Garros that year, her best performance in a Grand Slam event. Schwartz was unranked on the computer at the end of 2005. She retired in November 2006.