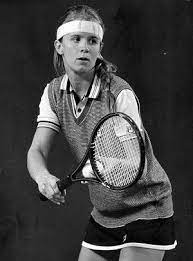 Carina Karlsson, born 11 September 1963 is a former professional tennis player from Sweden. Karlsson is most noted for being the first qualifier to reach the ladies quarterfinals of Wimbledon, which she achieved at the 1984 Wimbledon Championships. She began the main draw with wins over Anne White and Christiane Jolissaint, then defeated former Wimbledon champion Virginia Wade in the third round, 11–9 in the deciding set. In the fourth round she upset 15th seed Andrea Temesvári to set up a quarterfinal against Chris Evert-Lloyd, which Evert won in straight sets.