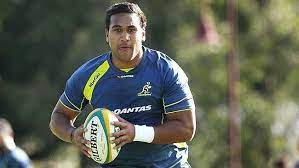 Kerry Cooper Vuna, born 5 July 1987, is a professional rugby footballer who plays on the wing for Newcastle Falcons in Premiership Rugby. He played rugby league as a wing for the New Zealand Warriors and Newcastle Knights in the National Rugby League competition, before switching to rugby union to play Super Rugby for the Melbourne Rebels.