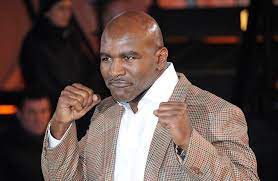 Evander Holyfield, born October 19, 1962, is an American former professional boxer who competed from 1984 to 2011. He reigned as the undisputed champion at cruiserweight in the late 1980s and at heavyweight in the early 1990s, and remains the only boxer in history to win the undisputed championship in two weight classes in the three belt era. Nicknamed “the Real Deal”.