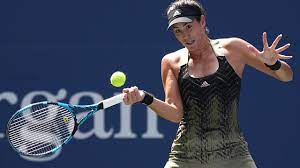 Garbiñe Muguruza Blanco, born 8 October 1993, is a Spanish-Venezuelan professional tennis player. Since turning professional in 2012, she has won eight singles titles, including two majors: the 2016 French Open and the 2017 Wimbledon Championships. She has a career-high ranking of world No. 1 in singles and a highest WTA doubles ranking of 10.