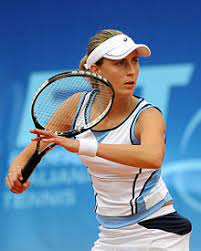 Mara Santangelo, born 28 June 1981 is a retired tennis player from Italy. Santangelo reached the fourth round at the 2004 Australian Open, defeating 16th-seeded Magüi Serna, Barbara Schett, and 19th-seeded Eleni Daniilidou—losing to eventual champion and world No. 1 Justine Henin after having been up 4–2 in the second set. She also won her first WTA title in 2006, defeating Jelena Kostanić in the final, her first victory on the WTA-level.