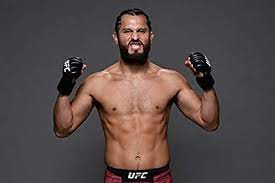 Jorge Masvidal, born November 12, 1984 is an American professional mixed martial artist. He currently competes in the Welterweight division for the Ultimate Fighting Championship (UFC). Masvidal has been competing professionally since 2003; he has also competed for Bellator, Strikeforce, Shark Fights, and World Victory Road. He holds the record for the fastest knockout in UFC history, at 5 seconds and he holds the UFC ‘BMF’ Championship belt. As of August 9, 2021, he is #6 in the UFC welterweight rankings.