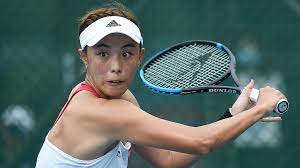 Wang Qiang, born 14 January 1992 is a Chinese professional tennis player. She has won two singles titles on the WTA Tour, one singles title on the WTA 125K series, and 13 singles titles and one doubles title on the ITF Circuit. Her best result at a Grand Slam tournament came at the 2019 US Open where she reached the quarterfinals. On 9 September 2019, Wang reached her highest singles ranking of world No. 12, becoming the second-highest ranked Chinese tennis player in history after Li Na. Alongside Li Na, Zheng Jie, Peng Shuai, and Zhang Shuai, Wang is one of only five Chinese tennis players to have reached the quarterfinals of a Grand Slam tournament.